The Halifax Road shop, a best-in-class diamond award winner with its Traditional Pork Sausage in the 2014 Smithfield Awards, this year saw two of its gold award winners -Thick Pork Sausage and 8oz Burger made with brisket – score a perfect 100 out of 100 marks.

The shop sources all its pork from local pig farmer David Mitchell, of Honey Pot Farm in nearby Wilsden and beef through local auction marts, including prizewinners at prime shows. Ellisons has won multiple awards over the years, notably for its sausages

Owton’s Butchers in Southampton is the 2015 Butchers Q Guild Smithfield Awards supreme champion – the highest honour a Q Butcher can achieve – with its Dry Cured Green Streaky Bacon, which had earlier picked up a coveted diamond award as the best product in the bacon and cured products category. Marked a perfect 100 out of 100, it was also chosen as Best English Bacon product.

The Smithfield Awards, the 29th year they have been staged, were open to all Q Guild members UK-wide and this year attracted a record entry of 472 individual products across nine categories from 56 Q butchers – more than half the national membership – were submitted this year.

All were judged by independent panels of food and meat industry experts. The measure of quality was indicated when nine products received top-rated diamond awards, 221 products clinched gold – representing 51% of the total entry – while 113 silver and 72 bronze awards were also handed out. 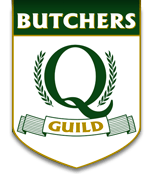 Trophies and certificates were presented by Monica Galetti, one of the best-known female chefs in London and presenter and judge on BBC2’s MasterChef: The Professionals, at a ceremony at Ironmongers Hall, London. (Thus, Nov 19)

Q Guild national chairman, Alnwick butcher Mark Turnbull, said: “The Smithfield Awards remain one of the most demanding and stringent product evaluation tests in the land and the esteem in which they are held is clearly demonstrated by the fact that this year has seen record entries from a record number of businesses.

“All products need to be at the very top of their game to stand a chance of success and nothing says ‘we’re the best’ like winning a Smithfield Award. They remain among the meat industry’s most esteemed accolades, not only motivating recipients to introduce even more successful products, but also providing ideas and inspiration to fellow Q Guild members across the nation.”

The Q Guild press office is based at the Guild’s headquarters at 8-10 Needless Road, Perth, PH2 0JW. For all other press enquiries, contact manager Gordon Newlands on 01738 633 160, email gordon@qguild.co.uk or visit www.qguild.co.uk